Unfortunately we don’t know a lot of details about the Riding crop other than that it belonged to my husband’s grandmother. She used to ride in America as a child. The family then immigrated from America to Australia in the early 1900’s.  We believe she continued to ride for most of her childhood.  Upon moving into the family home we found the damaged crop amongst other belongings and thought it would be nice to have it restored to display with other family heirlooms.

This repair is a great way to show you don’t have to get rid of your whips. Our latest customer told me his son left his whip outside and as sometimes happens the dog got hold of it and didn’t chew through the end of the whip but right in the middle.

So his 6ft whip became a 3ft whip and was of no use to him. So he contacted us and presto he now has a new 6ft whip and I think the colour match is pretty good! 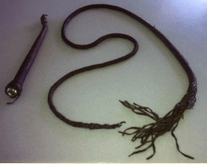 I received an email from a very distressed customer in Western Australia who had a whip that had been accidentally destroyed by her friends. The whip belonged to her late father – he bought it when they lived in the USA (from about 1984-1987) – her mum wasn’t entirely sure where he bought it but thinks Arizona. My customer’s mother kept the whip as a display item together with a hat belonging to her husband.

My customer’s friends got hold of the whip without asking- the above picture shows what they did!

The thong of the whip had broken off the handle, the tip of the handle was bent, the fall was broken off. The whip itself was a 20 strand bullwhip about 5 foot long.

Repairs: The following photos show the job done on the repair. I would like to thank George Yorksten in Toowoomba for his assistance with reconnecting the whip to the handle.

And the last word from our client:

“Thank you so much for the repairs on the whip – it looks great!”

I was contacted some time ago by a gentleman from Toowoomba, Qld, asking if I could put whips onto a couple of handles.

And of course I said yes. The handles he had were 100 years old and made by his grandfather.

Info from the owner Fred:

“The two handles were made by my grandfather Douglas Berge who lived in Guy Street, Warwick. He passed away in 1926.

The whips were given to my father Douglas Berge II who at the time was on a property in the Warwick District. When my father passed away some fifty years ago the handles came into my possession minus the whips.

Since then the handles have been in a box in the back shed, where I discovered them with all the family history a few months back. I decided to have whips made for the handles and found an article in the paper about a whipmaker in Warwick so I contacted him and on completion I will pass the whips onto my grandson.”

And the finished whips:

“I am afraid that I can’t tell you much about where it came from.

It belonged to my late father and he used it as long as I can remember. I am 36 years old so it must be older than me. Dad was an agriculture teacher in Toowoomba for many years and we also farmed near Allora. Mind you, nice little tame European breeds of cattle don’t really need a whip to scare them, so it didn’t get a lot of use. I think (but I can’t really remember) that there was a whipmaker in Allora back then, so maybe it came from him. Dad’s father was a farmer in Stanthorpe – perhaps it came from him? And mum’s father was a farmer/drover at Leyburn before the war, then a cattle truck driver after it, so maybe it was his. I know dad used to use a lot of my maternal grandfather’s riding tack because he said it was a shame to see such nice old gear rot away on a nail. After he died I gave all the harnesses, bridles, and his saddle to a family friend who runs cattle at Bell, and who sometimes, but not often, needs to muster on horseback in the hilly parts. I kept the whip purely for sentimental reasons.”

Repairs: Replacement of both keeper and fall.

“I could ride almost before I could walk and started to ride at shows at a very early age. From approx 10-16 years old we used to travel extensively around the state competing with a number of the horses with a very high success rate. I won a number of firsts at the Adelaide Royals on Amber. The whip was presented to me at one of the regionals for 1st in an overall champion event in I think 1955. It was for riding as distinct for best horse or jumping.”

Repairs: The end result is this riding crop will now be passed onto a family member, and so the story of this crop continues.

To add to this story a bit of history on the client’s grandfather which makes interesting reading:

“My grandfather, R.G. (Bobby) Gordon, ran the Dalgety staging property (as I remember must have been several thousand acres) near Dry Creek/Gepps Cross in SA (circa 1930-65) for all cattle and sheep coming from NT/Qld/SA to the Adelaide sales yards, which were next to the abattoir. With this background he was on good terms with many people in the livestock industry including the Kidmans and others such as R.M. Williams, who was in the Dry Creek area in the ’50s running rodeos. Bobby took several trips up the Birdsville Track to visit many of the landowners who sent cattle down to the staging area.

He was very keen and knowledgeable (regarded as somewhat of an expert) in the equestrian field.

He had a number of very fine horses that won a multitude of championships both at the Adelaide Royal and regional gymkhanas around SA. All horses were named after semi-precious stones – Amber, Garnet, Moonstone, Topaz, Zircon to name a few.

From Gepps Cross we used to ride the horses to the farrier in Prospect. This was in the same area as the original RMW store in Percy St. I remember visiting whilst waiting for the horses to be shod.

As a footnote, my grandfather was approached by Colin Hayes when Lindsay Park Stud was in its planning stages and asked if he wanted to go into partnership. Bobby said ‘No Colin, happy just giving advice’!!!”

We had received a whip from a local lady for repair. The whip had a broken handle but the thong was in great condition. The whip was a black 6ft roo hide whip, so we replaced the handle and the customer was very happy with the job, but the whip had caused a bit of discussion as to who made it and how many strands it had because it was so well made. I did ask the owner and she tole me that it was a gift to her father from a family friend in Kingaroy, Qld by the name of Pat Williams and the whip was made in 1990 but we don’t know how many strands. She is attempting to find out so stay tuned.