It has been a sad start to the year with the passing of George Yorkston, a man for whom I have the utmost respect, a man who gave his time freely to anyone who wanted to know about plaiting, and a man who was always happy to pass on his knowledge to those who wanted to listen. 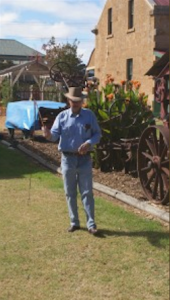 George in action at a plaiting workshop in Warwick

George was a great supporter of the plaiting schools held in Warwick, coming along and helping men, women and children try plaiting. Many of the students were first-timers, so George would sit with them talking and giving pointers along the way.

I used to love going o see George at his home in Toowoomba. He would meet you at the door with a “How ya goin’ mate?” and a handshake that you would never forget, always ready with a cup of tea!

I was told by one of my younger mates that I needed to mix with a younger crowd. I replied “What for, when I can sit and listen to their stories and knowledge, and have a genuine conversation like mates should?” I would rather do that than go out with younger mates, all looking at their iPhones getting their latest update from Facebook.

George had an amazing life with part of his life spent serving in the Navy and then working on the land in Western Queensland. He had a passion for horses and his family, and he spoke of both often. He had a passion for life and didn’t let age slow him down, travelling great distances to see his mates out west regularly in recent times. 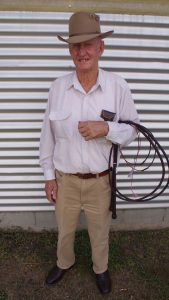 George with a famous Yorkston Whip

His laughter, good humour, knowledge and friendship will be missed by all who knew him. My condolences to George’s family for their loss and a big thank you for allowing me to post this.

You can read a bit more about George on our Legends page which gives a glimpse into his life and more on his plaiting, together with a poem written by Don Crane titled Yorkston Whips.